A groundbreaking pilot programme has just been launched at Starship Children's Hospital, which aims to help hundreds of children get off feeding tubes, and learn to eat and drink again.

The trial Hunger Provocation Programme started at the national children's hospital on 18 August.  The $45,000 needed for the programme is being funded by New Zealand-owned supermarket New World, which today announced it has come on board as the Starship Foundation's newest five star sponsor. 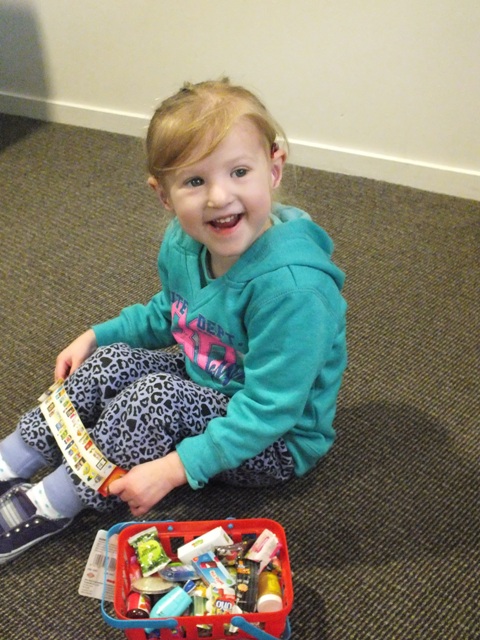 Around 70 children each year are discharged from Starship with a feeding tube still in place, requiring their parents or caregivers to continue to give their child liquid feeds through a tube that is either inserted through their nose or surgically inserted into their stomach.  It is estimated there are currently more than 600 tube-fed children in New Zealand, with 1 in 4 identified as being appropriate for tube weaning.

While in hospital children may need to be fed via a tube for a variety of medical conditions, including prematurity, metabolic disease and heart defects. Unfortunately there are a number of children who, despite resolution of the medical condition, become dependent on the tube and unable to return to oral foods despite the physical ability to do so.  In some cases tube dependency can be life long.

"These tube-fed children may not learn the oral motor and sensory skills needed to eat and miss out on the social aspect of mealtimes.  As a result, some children will refuse to eat or drink. They rely on the tube for all their nutrition despite no longer having a medical requirement for it," says Mandy Beatson, Starship Paediatric Speech Language Therapist. "The Hunger Provocation Programme at Starship is the first step towards ensuring these children are provided the support and opportunity to live more normal lives where they can eat and drink for themselves."

There is currently no such programme in New Zealand, with the only option for parents to either travel abroad for treatment, attempt on-line supervision, or pay around $25,000 for an overseas therapist to try to manage the complex feeding programme in the child's home without medical support.

A one-off trial was successfully completed at Starship with five year-old Thomas Morrison last year, and four more patients have just been selected for the roll out of the programme this month.  Each patient is required to attend an outpatient assessment followed by a three week daystay programme with intensive daily input from a primary consultant, dietitian, clinical psychologist, occupational therapist, speech therapist and nurse.

"It's changed our lives.  I was out with Thomas shortly after completing the course. It was time for morning tea and I didn't have the feed pump or anything for him.  I just popped into the supermarket, bought a banana and mashed it up," says Thomas's mother, Louise Morrison.  "It was so lovely to finally have a normal experience with food, and to be able to cook for my son is amazing.  Thomas is now at school and is able to go and eat with his classmates at lunchtime instead of just sitting there doing nothing with his pump going,"

Three year-old Nakiyah Reid travelled from her home in Wellington to begin the three-week programme on 18 August. As a baby she had an inverted jaw, found it hard to latch with breastfeeding had severe reflux and failed to thrive.  She has relied on a feeding tube to sustain her since she was born. "I'm super excited about the trial," says Nakiyah's mother Shoni Reid.  "I have dreamed about this day for so long.  It has been such a huge stress on us.  She deserves to eat like her sisters.  To have my baby eating means the world to me."

Although New World is now formally on board with Starship, it is not the first time the organisation has had a positive impact within the hospital.  The supermarket's hugely popular "Little Shop" promotional mini food items were used by Starship's Consult Liaison Team in the treatment of children with extreme food anxiety problems caused by problems such as food allergies or oral aversion.

"We are thrilled to be able to become a key sponsor of Starship. To have a national clinical resource available to make a real difference to Kiwi children and their families is invaluable. We know without the support of organisations like New World initiatives such as the trial Hunger Provocation Programme wouldn't be able to happen. We are pleased that our sponsorship means we are helping Kiwi families," says Steve Anderson, Managing Director New World.

Also as part of its new partnership with the Starship Foundation, New World is providing weekly fresh fruit baskets onto the wards at the national children's hospital, for parents and caregivers to enjoy.

"We are so grateful to New World for their generosity to Starship and for supporting the work we do to care for New Zealand children and their families," says Ms Beatson.