Legging it for Libby. A girl's marathon ordeal inspires a marathon run.

This November Des is running the ASB Auckland Marathon, inspired to sign-up as a Charity Hero runner for the Starship Foundation by an 11 year-old girl and her family, who have endured their own sort of marathon - living with severe epilepsy.

Both the Murray and the Harkness-Gower families, including young Libby, live in the small district of Inglewood in Taranaki and know each other as friends. Aware that Des is an accomplished long-distance runner, when Libby's Mum Claire heard about the opportunity to join Team Starship for the 2018 ASB Auckland marathon she challenged Des to sign up. 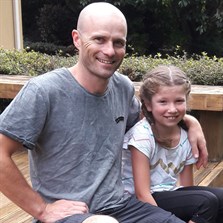 Des and his wife Leanne had followed Libby's story, so when I suggested the idea to run and fundraise for Starship, Des quickly said, 'I'm doing it!

The campaign - 'Legging it for Libby' was born and has already garnered close to $1800 raised for the Starship Foundation, an organisation that helps Starship accelerate world class healthcare for all New Zealand children.

Libby Harkness-Gower, now 11, was diagnosed with epilepsy at four months of age. Mum Claire describes it as severe and throughout her life Libby has suffered constant and frequent seizures. The family's initial connection to Starship was through the outreach service provided by the national children's hospital, where Starship specialists visit and support families, and local medical teams, around New Zealand.

"We saw a Starship Paediatric Neurologist who came to Taranaki Hospital for outreach clinic, years before ever coming to Starship when Libby was just a toddler," explains Claire.

Their first trip to Starship Hospital was in 2016. "Libby was not responding as we'd hoped to efforts to improve her condition through medication, and the visit to Starship was to work with the Starship Paediatric Neurology team to try and wean Libby off medication in a controlled environment," says Claire.

But unfortunately it didn't help in Libby's case and she remained on the same treatment and still having seizures. The possibility of surgery was discussed and Libby underwent many tests, including a five day EEG and an MRI scan of her brain, to try and understand her condition and the best treatment plan.

Then, when back in Taranaki, Libby had a bad patch - 150 seizures in three nights and was flown to Starship from Taranaki Hospital. After arriving the seizures thankfully abated a little, but surgery was confirmed.

Libby went home to Taranaki briefly before returning to Starship for brain surgery on 13 April 2017.

"She had a seizure at 6:30am on the morning of her surgery. Then she went to theatre for around 3 ½ hours where surgeons removed a lesion from her motor cortex - and she has had no seizures since," says Claire.

Libby spent eight days in Starship, before being able to go home to Taranaki briefly for a weekend, after which she returned to Auckland for five weeks of rehabilitation at the Wilson Centre.

The surgery was a huge success and has changed Libby's life. She is now able to attend school full time and enjoy life like any other 11 year old girl.

Claire talks about the motivation to connect with the Starship Foundation and to be part of Team Starship;

We wanted to give back to Starship. The care and support we received from all the staff at Ward 26A and Starship was amazing. We come from a small community where other families have spent time at Starship, so this is for Libby and all the other Inglewood and Taranaki Starship families.