Your support will save the lives of so many more children like Matilda.

In the middle of the night a seven-year-old girl boarded a life-saving flight that would become a defining moment in her life. Devastatingly Matilda had just hours earlier been diagnosed with leukaemia at her local hospital in Hastings. Her kidneys were already shutting down and she needed urgent dialysis and treatment.

Her mum Fiona recalls the moment she was told Starship’s Air Ambulance was on its way, in the middle of the night, to pick Matilda up. “That’s when the gravity of the situation hit me. I realised she had no time to lose.”

When the crew arrived in Hastings they found a little girl in a critical condition. The cancer was spreading quickly and Matilda’s body was starting to shut down. The team worked at speed to connect Matilda to the life-saving equipment that would ensure her safe transportation to Starship, where she could receive the specialist care she so urgently needed.

Fiona’s memory of the actual flight is blurry but there is one image that stuck clearly in her mind. “She had a big machine on top of her and there were lots of tubes. I remember looking at her and being shocked and so petrified that all this gear was needed. My head was absolutely whirling. It was all happening so quickly and I was trying to make sense of it.

“If Matilda had not been flown to Starship so quickly, I think she would’ve passed away that night.” 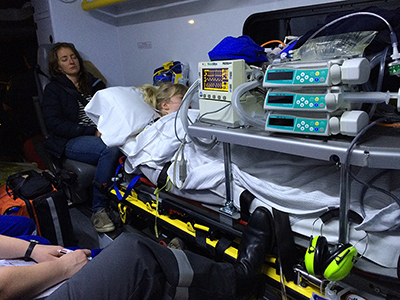 A team of highly trained experts

Starship is home to the only Paediatric Intensive Care Unit in New Zealand; any child requiring intensive care for 48 hours or more comes to Starship. Transfers are made by road ambulance, helicopter and fixed wing plane.

The Starship National Air Ambulance Service is staffed by a specialist trained intensive care experts. There is always a doctor and nurse on each retrieval flight and crew members are hand-picked for their skills and expertise but also, importantly, their ability to respond well in a crisis. It’s vital on these missions that their care wraps around the whole family as well as the patient.

Fiona recalls that special mix of skill and emergency care from the Air Ambulance team who arrived to collect Matilda that night. “They were so gentle and caring and kind, but also very professional and efficient. They knew how to deal with a family in crisis. We were scared, but we were relieved at the same time. We knew we were in good hands and Matilda would get to the place where she needed to be, quickly.” 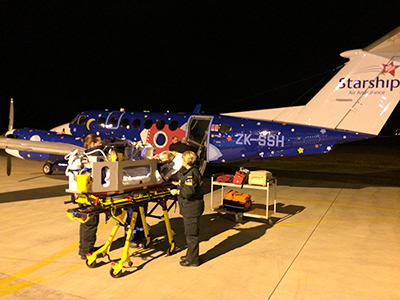 Back on firm ground

At Starship, tests revealed a large tumour on Matilda’s chest, which was diagnosed as t-cell acute lymphoblastic leukaemia. Fiona explains her daughter’s bone marrow was making way too many red and white blood cells: “the little factory had a malfunction and was overproducing things.”

“It broke my heart having to tell Tilda how sick she was and that for a while she was only going to get sicker. But the Starship team were amazing. They helped me figure out what to say to Tilda to keep her positive and they made her feel so comfortable, despite her sickness.”

As soon as her body was strong enough, Matilda began treatment for the cancer. She would remain in Starship for six weeks before she was well enough to go home. The plan that followed was one year of intensive chemotherapy followed by one year of maintenance. 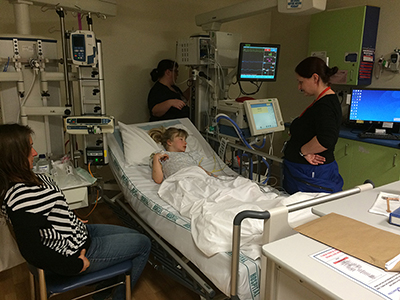 A lifeline with wings

The Starship National Air Ambulance Service is paediatric intensive care in the sky. Year round, day and night, it flies top medical experts to children like Matilda in life-threatening emergencies. These vary from serious complications arising from normal childhood illnesses such as flu to accidents such as drowning, car crashes and sporting injuries, as well as children suffering from heart conditions, seizures and meningitis.

In 2018 the service collected 183 children from all around New Zealand and bought them back to Starship for life-saving care. The Starship National Air Ambulance is quite literally their lifeline when they need it most.

The Starship Foundation supports the service to the tune of $1.5 million annually and we can’t do this without your support.

A young life saved… a world of possibilities 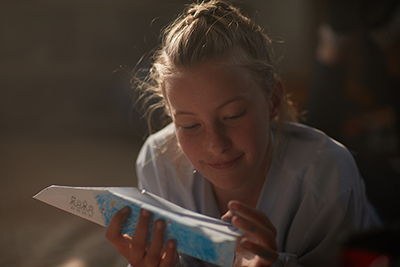 Fiona says that if there is anything positive to come from the cancer, it’s the learning that her daughter is courageous and brave. “Matilda’s a really special person because of what she went through.”

Matilda’s mum distinctly remembers a shift of focus when she came off her medication at the end of 2017. “At the beginning of 2018 before school started she said to me ‘Mum I’m going to sign up for every possible activity I can!’ She’s learned everything from kapa haka to futsal to horse riding. She gives everything a go and gives it 100%.”

Fiona told us about another special goal for her daughter: “Matilda wants to be a doctor. I am certain that has come from her experience.” 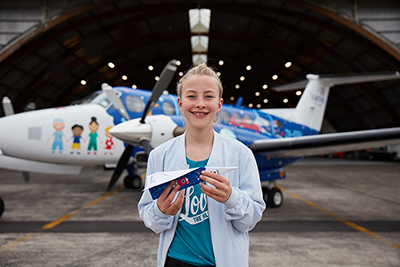 You never know when a friend or family member might need the help of Starship. Your kindness gives life to children like Matilda, and their families too. Thank you on behalf of all the children and families who need it.