We urgently need to raise $235,000 to provide more Play Specialists for sick children.

The Magical Power of Play

This is a special story about the trusting relationship built between five-year old Hollie and her Starship Play Specialist, Carolyn. In August 2018 Hollie's family received the devastating news that she had cancer. Since then, Hollie has been working with Carolyn her Play Specialist, using many different play techniques to support Hollie when she needs it most. Play Specialists like Carolyn help reduce treatment times and improve outcomes for children, whilst also providing an invaluable support for clinicians. Unfortunately, there is not enough funding available to provide Play Specialists to every child that needs one, will you help us to raise our target of $235,000 to fund this valuable resource?

Hollie was experiencing leg and abdominal pains so her Mum, Johanna, took her to Starship's Emergency Department to have her checked out. Tests revealed a neuroblastoma tumour on Hollie's abdomen which had spread to her bones and bone marrow. Because of her age, Hollie's type of cancer is considered high risk.

Since her diagnosis, Hollie had chemotherapy and surgery to remove the majority of the original tumour. Unfortunately she had a poor response to that initial therapy. The Starship team embarked on refractory treatment to try and get her disease under control. Since then Hollie has had three cycles of chemotherapy and immune therapy, and is responding to the new treatment plan. If she continues to respond well she will have a bone marrow transplant, then radiation, and then a further six months of chemotherapy. So the plan at this stage is one more year of treatment. Hollie's family are taking it day by day, week by week.

Seeing the world through Hollie's eyes

The cancer diagnosis meant Hollie was thrown into a world of intensive testing and treatment. Everything and everyone was new and scary. Hollie became incredibly anxious to the point where even simple and non-invasive procedures made her fearful. Her parents, Johanna and John, were concerned about how she was going to cope with the treatment ahead of her.

Our Play Specialists are experts at talking to children using language that helps them understand what's happening to them, gives them a sense of control and allows them to express their feelings. The use of play dough, bubbles, stickers, paint, crayons, stories and music de-stresses kids (and parents too!) and gives their brains a rest from all the medical things happening around them.

Carolyn quickly identified a need to work with Hollie to help her get her anxiety under control. It was important for her to feel more comfortable about what was happening to her, and supported. One of the techniques she used was a 'therapy doll' which helped Hollie understand some of the medical aspects of her care through guided play. The sessions helped desensitise Hollie to the medical equipment and procedures she needed to help her fight the cancer. 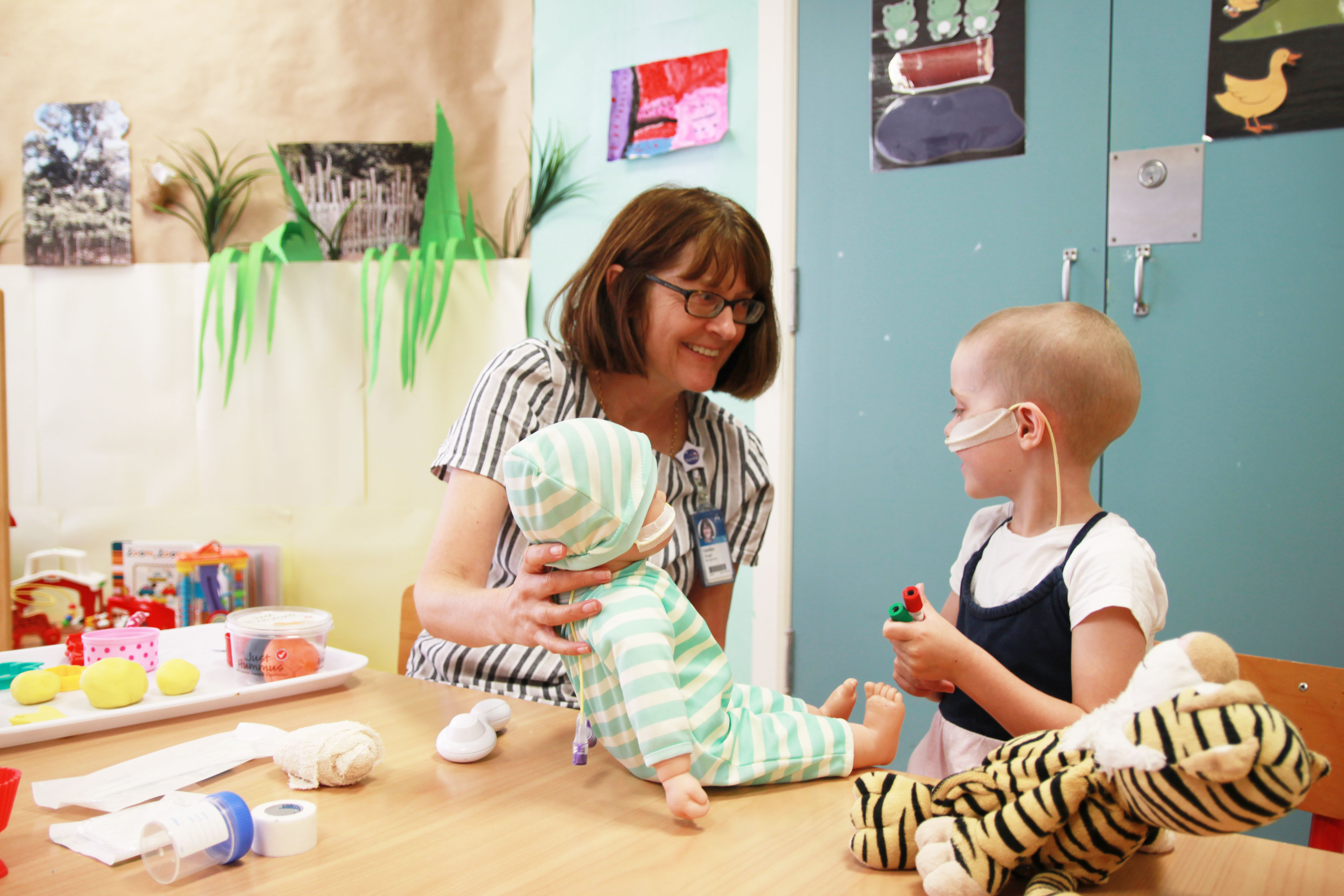 The Power of Play

Starship's Play Specialists come from a range of backgrounds that anchor their practice in child development. They work in a way that suits each child's personal, family and medical needs. Having a Play Specialist on a child's care team makes a big difference - children are better equipped to cope with their treatment because the Play Specialists help them to develop coping strategies to reduce pain and anxiety, and to better understand what is happening to them.

Unfortunately, due to lack of funding, not all children at Starship have access to a Play Specialist when they need one. And not all Starship staff can benefit from their critical work.

Dr Mark Winstanley, a Paediatric Oncologist at Starship, is in charge of Hollie's treatment and care.

Mark says: "The changes I have personally seen in Hollie are immense. Carolyn's work has enabled her to cope with the extensive medical procedures needed so far and will be critical as her treatment progresses.

"Right now at Starship we urgently need more Play Specialists to help children during peak times in our Children's Emergency (CED) and Radiology Departments. This will help us deliver less invasive treatments, faster recovery and better outcomes for our young patients.

Will you help us raise $235,000 to provide more Play Specialists for children like Hollie?