Kirsten and Tim share their son Kipp's tough journey  It all started with what Kirsten describes as a "bad cough".

Her two-year-old boy Kipp had been up most of the night. When she went to wake him in the morning, he wasn't in his bed.

I found him lying on the bedroom floor, unresponsive and barely breathing. It was terrifying.

Kipp had to be helicoptered to Dunedin hospital, where X-rays showed his tiny lungs were full of fluid.

"By this stage we were in Intensive Care, and were told by doctors that Kipp really needed to be intubated and put on a ventilator. But his throat was so swollen and he was so little that it was a struggle to get a tube in. Eventually they managed to get a tube down which would normally be used for premature babies."

But Kipp's condition didn't stabilise. His lungs were failing and his heart was starting to fail too. It's any parents worst nightmare.

It was absolutely awful... We didn't really know if our little boy would live or die.

That's when the doctor told her that Kipp would have to be airlifted to Starship on the Starship National Air Ambulance Service.

"When the Starship team arrived it was such a huge relief. We recall Di, one of the nurses, had the most calming presence - she made us feel like everything was going to be OK." Kirsten remembers.

Before Kipp could be transported, Starship doctors had to perform emergency surgery to put him on a life-support machine called extracorporeal membrane oxygenation (ECMO). It did the work of Kipp's heart and lungs by pumping and oxygenating his blood.

Then Kipp was brought here to Starship, where our dedicated paediatric intensive care teams cared for him around the clock. It was touch and go for over a week - and there were moments where it was not clear if her little boy would make it.

But after 10 days, Kipp began to stabilise.

And today, he is a healthy and happy little boy. Kirsten and Tim will never forget what Starship did for their family.

They saved our little boy's life. If it wasn't for the specialised medical care and life saving equipment available at Starship, Kipp simply would not have survived. And that would have completely changed our lives forever.

Kipp's story shows just how important Starship is to the children of New Zealand and their families. And as the only Paediatric Intensive Care Unit (PICU) in the country, we need to keep up with the latest equipment and technology and provide on-going training to our staff.

Will you donate to Starship today and help make sure other seriously ill children like Kipp get the best possible care and the greatest chance at life? 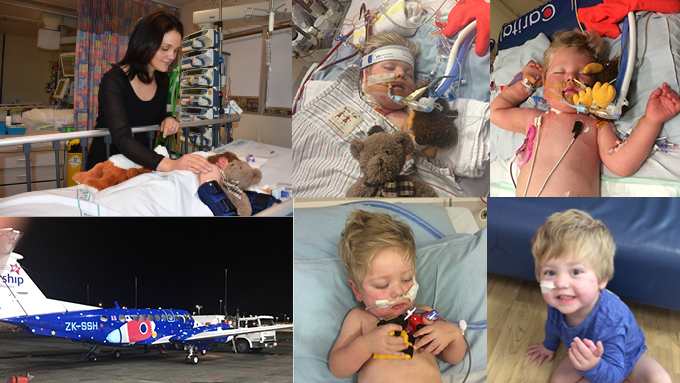