Necrotising enterocolitis (NEC) is a severe disease of the intestinal tract, typically involving small and/or large bowel. Diagnosis is made with a combination of clinical features and radiographic findings, although sometimes a firm diagnosis may not be made until laparotomy. The cause is unclear but is probably related to a complex interplay between intestinal ischaemia, injury and infection. The incidence is proportional to gestational age, and the risk of developing NEC continues longer in smaller infants. Other infants at risk include asphyxiated infants, infants following cardiac surgery, and following exchange transfusion.

The incidence in infants <32 weeks is in the region of 5-10%, depending on the diagnostic criteria used. The survival for infants with non-surgical NEC is good, whereas up to 50% of infants who require laparotomy may die. Extensive resection of bowel may be associated with short bowel syndrome.

Please note: images that have a white symbol at the top right, such as the Definite Radiographic NEC image below, indicates an image gallery that has multiple images - click on the image to open the gallery.

Lucency within the bowel wall is seen throughout the abdomen.

In this supine view, no free intraperitoneal air is seen but a lateral decubitus view is necessary to exclude a bowel perforation.

The intramural gas may show as thin lines within the bowel wall, or as a series of coalesced "cysts". 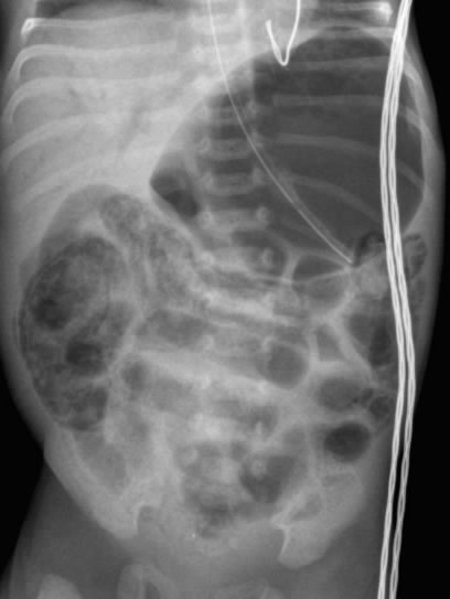 Portal venous gas may be seen if gas produced by organisms in the intestinal wall tracks through into the portal circulation. It can be a subtle finding.

In the image to the right, there is extensive pneumatosis involving several areas of the bowel. There is distension of the stomach. There is also lucency in the liver, representing portal venous gas.

Suspicious but not NEC

Sometimes the diagnosis of NEC can be difficult to make on both clinical and radiological grounds.

In this circumstance, repeating the radiographs may help in establishing diagnostic certainty.

Occasionally, faecal loading of the large bowel may have appearances of NEC.

This initial film demonstrates a suspicious area in the right upper quadrant.

Suspicious but not NEC

The baby had no clinical signs suggestive of NEC but had passed a small amount of rectal blood.

On a film the following day, there appeared to be cystic abnormalities of the bowel in a similar area. The baby remained well, with no changes on the full blood count, no abdominal distension or signs, and no bilious aspirates. He was however commenced on treatment for NEC on the basis of suspicion about the radiological findings.

He then passed a large bowel motion. A follow-up film was reassuringly normal and, in the absence of any significant clinical or haematological indicators of NEC, treatment was stopped at 48 hours. He remained clinically well and tolerated full oral feeds without incident.