Other abdominal radiographs in the neonate

Please note: images that have a white symbol at the top right, such as the CPAP Belly image below, indicates an image gallery that has multiple images - click on the image to open the gallery.

It is common to see abdominal distension with CPAP. Gas flow rates can be high to maintain a CPAP pressure, and some gas will naturally take the path of least resistance and enter the gastrointestinal tract.

Clinically, there is distension of the abdomen without discolouration of the abdominal wall and without tenderness. Feeds are often tolerated but gastric aspirate residuals are not uncommon. The aspirates are usually undigested milk, and bilious aspirates should make you think of other causes. Occasionally the distension can be so great as to cause respiratory embarrassment.

Perforation is not a diagnosis and does not indicate the underlying cause. A lateral decubitus film with the left side down gives the best opportunity to define air within the abdominal cavity. The radiograph must be closely scrutinised for evidence of Necrotising Enterocolitis.

The use of indomethacin has been postulated to increase the incidence of bowel perforation. However, large randomised studies have not shown any increase in infants treated with indomethacin.

There is debate about whether an isolated perforation can be managed conversatively with peritoneal drainage. This may be used as a temporary measure if the baby is too ill to be considered for a laparotomy, or for some infants this may be a definitive treatment.

Partial or complete duodenal obstruction may result from intrinsic causes or external compression. Duodenal atresia results in complete obstruction. Radiographs show a characteristic picture of a "double bubble", with air filling a distended stomach and the blind-ended duodenum. There is an association with Trisomy 21.

Partial obstruction may be caused by an intraluminal web, duodenal stenosis, annular pancreas, or congenital bands.

Duodenal obstruction may present in utero with polyhydramnios. The antenatal ultrasound and plain radiograph images are of an infant with duodenal atresia who underwent a duodenoduodenostomy on the second day of life. The karyotype was normal.

The formation of normal bowel in the embryo involves a rotation of elongated intestine into the abdominal cavity. The proximal small intestine develops a C-shaped contour, with the duodenum fixing to the left of the midline at the ligament of Treitz. The caecum undergoes counter-clockwise rotation to end up in the right lower abdomen. Incomplete rotation results in inadequate fixation of the intestinal mesentery. Bands may be formed which cause incomplete intestinal obstruction. If there is inadequate fixation of the small bowel, the intestine can twist on the axis of the superior mesenteric artery.

The presentation may be subtle (including intermittent episodes of vomiting in a baby otherwise feeding normally) or more obvious with signs of bowel obstruction or even life-threatening collapse. Episodes of bile-stained vomiting in infants should be taken seriously. There may be blood-stained stool.

Plain films may be normal or may show evidence of duodenal obstruction with a paucity of bowel gas through the rest of the abdomen (see top image to left). Air-fluid levels suggesting obstruction are not usual with malrotation. An airless abdomen is a sign of severe problems and usually indicates intestinal infarction. Upper intestinal contrast studies are reliable in localising the ligament of Treitz. There may be a typical corkscrew constriction of the third portion of the duodenum (see images to the right).

Treatment is surgical, with correction of the malrotation of the colon and therefore prevention of a midgut volvulus. If a volvulus is suspected, an emergency laparotomy should be undertaken.

Viscous meconium in the terminal ileum may cause intestinal obstruction. It may be a manifestation of cystic fibrosis in approximately 10% of the CF population. Therefore, any baby with meconium ileus requires further investigation for CF.

Clinical presentation is usually with abdominal distension and bilious vomiting. There are often many gas-filled bowel loops, but without air-fluid levels. Air-fluid levels are thought not to occur because the meconium does not provide a good air-fluid interface. There may be a "soapy" mass in the right lower quadrant. A contrast enema will show a microcolon secondary to distal ileal obstruction. Calcification may be seen on a plain radiograph if there has been meconium peritonitis.

Gastrograffin enemas may relieve the obstruction, but surgery may also be required. 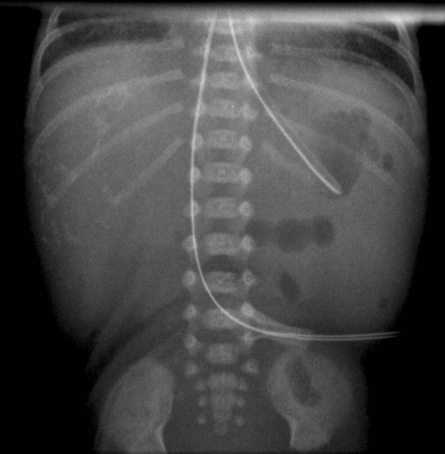 Bowel obstruction with perforation occurring in utero can lead to leakage of meconium into the peritoneal cavity.

The subsequent chemical peritonitis can leave calcified areas that are visible on plain radiography. Any cause of bowel obstruction (atresia, volvulus, meconium ileus, and Hirschsprung's disease) can lead to this appearance.

If the peritonitis occurs close to delivery, there may not be sufficient time to develop calcification, although there may be a significant chemical peritonitis. Ascites may also be present. Some infants will require surgery for persistent bowel obstruction or for adhesions.

Hirschsprung's disease causes up to 85% of neonatal intestinal obstructions. Commonly, it presents as a failure to pass meconium in the first 24-hours of life. There may be progression of signs and symptoms, with vomiting and abdominal distension over the next few days. In older children, short-segment disease may present as persistent constipation; in some children, it may present as an enterocolitis with diarrhoea and rectal bleeding.

The underlying pathology is an absence of ganglion cells in the mesenteric plexus of the colon. There is essentially an obstruction at the point of aganglionosis as peristalsis cannot progress beyond this point. The point where aganglionosis begins is most commonly at the rectosigmoid junction but can be seen in some cases as proximal as the small bowel. Up to 10% of cases involve the entire colon. Some cases are complicated by enterocolitis with progressive dilation of the colon, stasis of bowel contents with bacterial overgrowth, and acute fluid loss into the intestine with diarrhoea and dehydration. This can be severe enough to cause anuria and even death. The diagnosis can be made by a rectal biopsy showing a lack of ganglion cells in the myenteric plexus of the colon.

Plain radiographs may show dilated loops of small bowel with air fluid levels. Although a transition zone (where the agangliosis starts) may be seen in older children, it is not usually seen in neonates. The transition zone is normal in calibre but the proximal bowel is dilated. If enterocolitis is present, the colon will appear dilated and there may be pneumotosis.

Antenatally, there may be polyhydramnios detected. An ultrasound may confirm this, and the stomach may appear small. Following the delivery, the baby may have excessive secretions which pool in the proximal pouch. The baby will choke, cough, or regurgitate if fed. Abdominal distension is common if there is a distal fistula, as air moves through the fistula into the stomach. If the baby requires ventilation, this may be exacerbated by positive pressure ventilation and cause further respiratory deterioration.

The initial diagnosis of a proximal pouch is confirmed by an inability to place a gastric tube into the stomach. The tube is seen in the upper oesophagus and the pouch may be outlined by air. The presence of air in the abdomen indicates the presence of a distal fistula. For distal pouches or H-type fistulae, the diagnosis can be more difficult.

An image of the anatomical findings at bronchoscopy is shown in the image gallery above.

Be aware that a traumatic oesophageal perforation (commonly after a difficult intubation or other instrumentation of the pharynx) can give a similar radiological appearance.

Other associated anomalies are common and the baby should have an echocardiogram. The echo should also identify which side the aortic arch is on, as this impacts on the surgical approach. 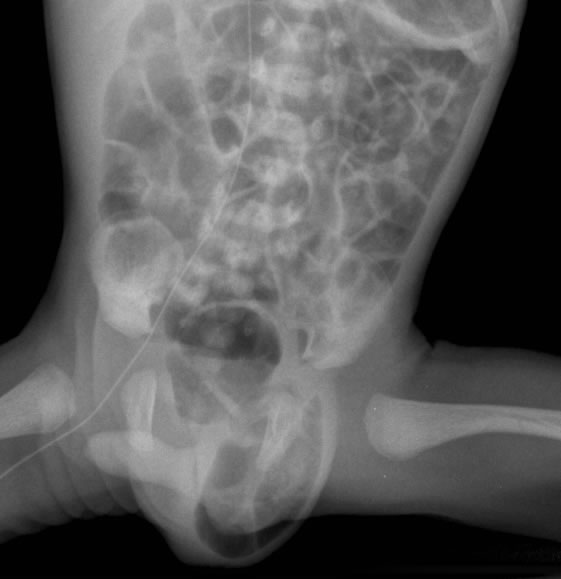 Link to the hernia surgical guideline to view a video demonstrating how to reduce an inguinal hernia.