Structural lung disease in the neonate

Please note: images that have a white symbol at the top right, such as the Congenital Diaphragmatic Hernia image below, indicates an image gallery that has multiple images - click on the image to open the gallery.

Congenital Diaphragmatic Hernia (CDH) is a congenital defect of the integrity of the diaphragm, resulting in herniation of bowel into the thoracic cavity. Whilst clearly this is not an optimal position for bowel contents, the secondary effects of pulmonary hypoplasia and associated pulmonary hypertension usually determine the outcome. It occurs in approximately 1:3000 births and is generally sporadic although recurrence in families has been reported.

The lesion is secondary to failure of development of the posterolateral portion of the diaphragm (resulting in persistence of the foramen of Bochdalek) The left side is affected in 90% of cases. Indeed, if the right side is affected, one should consider other structural lung lesions (such as a cystic adenomatoid malformation) in the differential diagnosis.

Survival is approximately 50%. Antenatal detection has been associated with a worse prognosis, but with the routine use of antenatal ultrasound most are now detected antenatally and this in itself is not necessarily a risk factor for poor outcome. However, risk factors for mortality include polyhydramnios and other associated anomalies (including Trisomy 18 and 21). Approximately 40% of infants with CDH have other abnormalities.

Delivery room management involves intubation and decompression of the stomach with an orogastric tube. Initial stabilisation may involve muscle relaxation and sedation. Infants frequently require treatment with inhaled Nitric Oxide and HFOV. There is no need to urgently repair the defect and studies have demonstrated that delaying surgery until the degree of pulmonary hypoplasia can be determined and the pulmonary vasculature is more stable does not result in an increased mortality. In general, ECMO is rarely indicated for infants with CDH.

Clinical examination may show severe cyanosis, a scaphoid abdomen, reduced or absent air entry on the affected side, and occasionally bowel sounds may be heard in the chest. Rarely, a diaphragmatic hernia may be an incidental finding in an older child.

Congenital cystic adenomatoid malformation of the lung is a relatively common structural lung abnormality. It frequently presents on antenatal scanning as a cystic lesion. It may be associated with fetal hydrops if it is large enough to obstruct venous return to the heart.
There are several identified types, based largely on the solid, microcystic, or macrocystic components of the lesion. Solid lesions have a worse prognosis than large cysts.

There may be "regression" of the lesion in utero and the chest radiograph at birth may be essentially normal. At the other extreme, there may be significant respiratory distress at birth and the baby may require urgent surgery.

There are reports of malignancy in later life. The usual recommendation is to perform a CT scan 3-6 months after discharge and to consider surgical resection in infancy even if the baby remains well.

The radiographs and CTs are of a preterm infant with a large CCAM. He had very little respiratory difficulty at birth but there was increasing tension in the lesion, for which he required surgical resection acutely after an unsuccessful attempt at continuous drainage.

Air-filled cystic masses are not common in neonatal practice.

They may be acquired (from airway trauma or infection), or may be associated with structural anomalies of lung (for example, cystic adenomatoid malformations or pulmonary sequestrations).

Whilst not strictly structural lung lesions, congenital abnormalities of the upper airway may be suspected on plain chest radiographs. 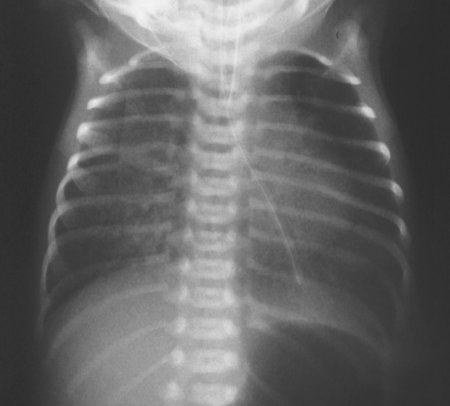 In the image to the right, this baby was intubated for respiratory distress. A nasogastric tube was passed but unable to be inserted fully.

On the chest radiograph, the nasogastric tube is seen in the left main bronchus, and ending in the left lower lobe.

Laryngoscopy confirmed the presence of an extensive laryngotracheooesophageal cleft extending from larynx to carina.